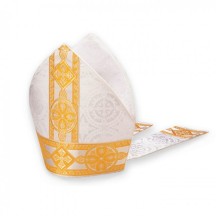 A good friend and colleague recently disclosed that he had been chosen as one of the four final candidates in an election for Bishop. (Read about it here.) It put me into a reflective mood, recalling the occasions when I had a brush with episcopal office.

The first time was in 1997 in the Diocese of Edmonton, my home and current diocese. I had been serving as an Archdeacon for a couple of years, and for the first time had had some significant interactions with people in other parishes. Out of that came a request from someone present in one of those events that I allow her to put my name forward in the upcoming election of a new bishop. I was quite daunted by the idea, even though I admit to being flattered by the request. After some thought and prayer and discussion with my wife, I decided to let it happen.

The search committee asked each candidate to submit a fairly large bundle of material, including a detailed CV in a particular format, and a personal statement about ministry, and my sense of the episcopal office and how I might fill it if I were so called.

Assembling the CV was a good exercise: it was the first time since my ordination that I had put all of my work history down in one place. The document turned out to be much longer than I expected, considering I had only been ordained for 10 years. I felt a real sense of accomplishment when I re-read it after finishing.

The statement was quite another matter. I sweated blood over it, reading, thinking, praying, writing, tearing up, writing again, finally telling myself that it wasn’t going to get any better. It may be the best piece of writing I’ve ever done. In the years since, I have returned to it often, to check up on my continuing sense of vocation, and where my ministry is headed.

At the electoral synod, I was seated with the rest of the clergy, as required for voting. My wife was sitting in the observers’ seats at the back of the Cathedral, along with some other people from my parish. The preliminaries having been taken care of, we proceeded to vote, and then to sit and wait for the results. I wasn’t dead last in that first ballot, but pretty close, with 2 clergy and 3 lay votes. I knew who the clergy votes came from (me and my proposer), but to this day I have no idea who were the 3 laypeople who felt I was the best choice for bishop. On the second ballot, it was down to 1 clergy and 2 lay votes, still not the very bottom, but it seemed like a good time to drop out and stop wasting people’s time. The folks from the parish said they could all hear my wife’s sigh of relief when my withdrawal was announced.

That day, the diocese of Edmonton elected the Rt. Rev. Victoria Matthews as the first female diocesan bishop in the Anglican Church of Canada.

The second time I found myself on an episcopal election slate was for the Diocese of Qu’Appelle in 2006. I had been quite astonished to get the call from their search committee asking me whether I would accept the nomination. (My proposer had not contacted me first, as should have happened.) I asked for some time to consider it, coming as it was more or less out of the blue. My wife and I talked about it at length, and I  consulted my Bishop of the day. I was less than 3 years into a new ministry, and it hardly seemed the time to leave.

Nonetheless…
A call like this did not seem to be one that could be ignored — it might well be of the Spirit. My bishop suggested that the only real way to determine that was to let my name stand. And so I did. It felt quite different from Edmonton in 1997. For one thing, I would be moving to a completely new city, working with people I did not know at all. For another, that Diocese is a land of wide-open spaces, and many small multi-point charges. As bishop, I would likely spend much of my time in long-distance driving. The final thing was that I was nine years older and more experienced, and had a much better sense of my own capabilities and what the office of Bishop entailed.

The documentation they required was much like that asked for in 1997, so had most of it more or less ready to go, after another revisit to my personal ministry statement.

The results of that election were somewhat more gratifying. There were six candidates, and I ran a solid third until the third and final ballot. My good friend Gregory Kerr-Wilson was elected that day, while I sat at home in Brandon with my phone handy, waiting for results of the ballots.

That’s the story, although there’s an epilogue of sorts. I was approached to let my name stand in another election a year or two later. After considerable thought and prayer, I concluded that I did not hear the call to episcopal office, and did not let my name stand.

The formal processes I went through were quite different from the one my friend is in. Nonetheless, it is very clear to me that the internal process of seeking to discern a call to ministerial office is much the same however it may be externally structured. The writing of my personal ministry statement was an important turning point in my own ministry, and the document became one of the touchstones of my continuing vocation.

I learned, particularly in the 1997 election, that vocation must be heard within, and that requires intense prayer. My understanding of prayer is that it begins with listening, not with telling God what you want God to do. That became abundantly clear in 1997, in 2006, and then when I declined nomination.

Did I ever want to be a Bishop? I don’t know. I do know that some people say that anyone who really want the office shouldn’t get it — but probably deserves it. The office is almost impossible, but some people of my acquaintance have managed to make it look easy. I know that’s not true. I am also quite sure that, had I been elected, I would probably have managed to make it look very difficult!

Retired priest of the Anglican Church of Canada, living in Edmonton AB, and serving as an Honorary Assistant at Holy Trinity Anglican Church, Old Strathcona. View all posts by robinw48

One thought on “On bishops and other callings”